Whinnie was a male rabbit that Melanie Martinez used to have. He was decapitated after Melanie gave him away to her friend, later causing her to get a tattoo of him.

Melanie shared the story with Fuse, stating, "It was actually my first pet ever. And then I got a dog and my parents told me I couldn’t have a bunny and a dog, so we all decided to give the bunny away to a friend of a friend who already had a bunny. So we thought 'It’ll have a friend, that’s amazing, that’s awesome.' So they left my bunny and their bunny in the backyard unattended for like, four hours. They ended up finding their bunny in their neighbor’s backyard and my bunny’s head was in their yard." 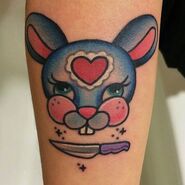 The tattoo based on Whinnie's death 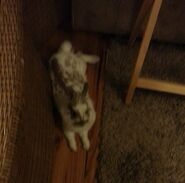 Whinnie in Dollhouse.
Add a photo to this gallery

Retrieved from "https://melanie-martinez.fandom.com/wiki/Whinnie_(Pet)?oldid=108939"
Community content is available under CC-BY-SA unless otherwise noted.