The Voice is a TV show where singers compete for a grand prize of $100,000 and a recording contract with Universal Music Group. Successful artists have come out of the show, such as Cassadee Pope, Melanie Martinez, and Christina Grimmie. Melanie was a contestant on the third season of the show, and she was eliminated during the fifth week.

During the first stage of the show, the Blind Auditions, coaches are turned around in chairs facing the audience. One person at a time sings, and if the coach wants them to be on their team, they will press a button on their chair. The chair will then turn around to face the singer. If no judges turn around, the contestant is sent home. If more than one turn around, the contestant chooses who they want. The coaches will have 16 contestants on their team at the end, so they choose carefully.

During the battles, two members of the same team battle each other with the same song. Then, their coach picks a winner. The loser most often will get sent home, although occasionally they will get stolen by another coach by pressing their button, starting in Season 3. If multiple coaches steal, then the contestant will pick which team they want to go to.

Introduced in Season 3, the Knockout Rounds are the third part of The Voice. Two artists from a team are paired up, although they each sing individual songs. They perform these in succession, and are only told who their partner is a few minutes before they perform. At the end of the two performances, their coach picks who moves on to the next round. Like Battles, coaches could steal artists beginning in Season 5.

The Battles Part 2 only existed in Season 6, and replaced the Knockout Rounds, which were brought back the next season. The singers are paired similarly to the Knockout Rounds, and there is one celebrity advisor for all four of the teams. The coaches give their pairs a list of songs to pick from and they must agree on which one to perform. The selection is similar to the Battles.

Artists perform in weekly shows, this time for public vote. These rounds eventually narrow the show down to a final winner.

These are the songs that Melanie covered while on The Voice. They are listed in order of performances. 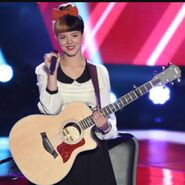 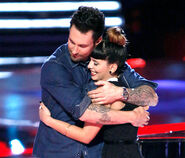 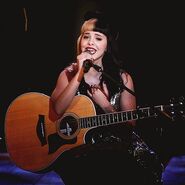 Add a photo to this gallery
Retrieved from "https://melanie-martinez.fandom.com/wiki/The_Voice?oldid=143366"
Community content is available under CC-BY-SA unless otherwise noted.