"Strawberry Shortcake" is the seventh track by Melanie Martinez that is featured on her sophomore album, K-12. The music video, originally available as part of the film, was later separately released on December 12, 2019.

On August 6, 2019, a snippet of this song was released through an advertisement for the K-12 Tour on Facebook and Instagram. A second snippet was released exclusively in France and Italy as an assignment on September 4, 2019 before being officially released worldwide.

In 2020, a short, one minute video of Melanie explaining the meaning behind the song was released through Apple Music. In this video, Melanie stated that the song's theme was partially based around her own experiences as a child and as a female artist; in sixth grade, it would be a dress code violation to wear "a spaghetti strap and a short skirt" because it was a concern that 'what will boys do?' or 'what will boys think if you're dressed like that?'. Melanie also stated that there was always this attention on how she looks as opposed to what she thinks.[1]

The song is about how many girls are taught from a young age that they are only valued if they are attractive to men. This regularly causes them to feel insecure about how they look since they do not fit society's standards. Cry Baby takes several measures to change her appearance so that she is considered more attractive, such as waxing her legs and stuffing her bra so her breasts appear larger. Due to this, she draws an excessive amount of attention from boys, causing her to feel as if it is her fault that they are becoming distracted by her and her body. Therefore, the song addresses sexual harassment and carries a critique of rape culture and victim-blaming.

[Verse 1]
Feeling unsure of my naked body
Stand back, watch it taking shape
Wondering why I don't look like Barbie
They say boys like girls with a tiny waist
Now, my mum is preaching to make sure I'm pure
But I never really cared about that shit before
Look around the room to whoever wants me

[Verse 2]
Gotta make sure that my legs are shiny
Hot wax melting, burn my skin
People all around me watching closely
'Cause it's how I look and not what I think

[Pre-Chorus 2]
Mikey's eyes seem to be glued to her chest
So, I'm stuffing my bra so they might look the best 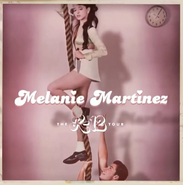 This is the seventh music video that appears in Melanie's film, K-12. The video starts with Cry Baby standing in the gym locker room, before the choreography starts. With a group of girls around her, which Celeste and Angelita are part of, she talks about some of the problems she confronts as a girl in society, from the objectification of their bodies to the need to conform in the societal norms. Topless and in a giant cake skirt, she is surrounded by a group of boys, who start screaming and eating her skirt, while she is visibly uncomfortable, and follow the girls at the swimming pool.

Retrieved from "https://melanie-martinez.fandom.com/wiki/Strawberry_Shortcake?oldid=156055"
Community content is available under CC-BY-SA unless otherwise noted.