Stella Rose Saint Clair is an actress and fashion designer. She appeared in the Cry Baby, Dollhouse, and Sippy Cup music videos as Cry Baby's mom. She had also designed some of the clothing Melanie Martinez has worn in live appearances and photoshoots.

She is a co-founder of Doll Eyes alongside Elena Kanagy-Loux.

In the beginning of the music video for Dollhouse, Stella plays Cry Baby's mother, who is shown passed out on the couch with a liquor bottle in her hand. Later, she is shown posing with her family for a picture. The video cuts to the family sitting on the couch watching television. The mother looks over at her husband, only to see a kiss on his neck with what seems to be made out of pink lipstick. She pulls out a flask with alcohol in it, and proceeds to drink from it with a tear streaming down her face. The mother is later shown washing dishes in the kitchen with her husband sitting at the table, reading from a newspaper, living with the fact that her husband is a liar and a cheater. In the end, she is stuck in the cycle of the Dollhouse, pretending to be perfect, hiding behind closed doors, and living a lie.

In the music video for Sippy Cup, her appearance as Cry Baby's mother begins clearly drunk, and she's having trouble staying steady while walking down the hallway to Cry Baby's family home, carrying a half empty bottle in her left hand. Next, she's shown sitting down in the kitchen, pouring the red liquid into a golden teacup with a teddy bear engraved on it at the dinner table. Then, she's shown on the ground barely awake with the bottle next to her, missing from her hand. She lip syncs the first few lines of the song in this shot, before turning her head when she's passed by her husband, who brought home another woman he's cheating on her with. She responds to this by picking herself up from the ground in an attempt to grab and strangle the woman, but she's restrained from doing so by the husband. They're shown having a fight, before it's cut to the next scene, where the husband and the girl are tied down to two opposite facing metal chairs with rope. The mother finishes pouring the alcohol into the teacup, before drinking it and picking up and licking a sharp knife that was on the table next to her. She then uses the knife as a weapon to murder the husband and woman she's being cheated on with. She covers their corpses with a blood covered sheet, which is soon discovered by Cry Baby. Once Cry Baby discovers her father is now dead, the mother covers her mouth and nose with a fabric that is infused with chloroform to knock her unconscious. Cry Baby wakes up in her bedroom tied down to her bed with rope, before her mother finally makes her drink syrup from a sippy cup to make her fall asleep and later believe the deaths were all just a nightmare. 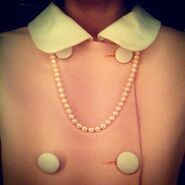 Behind the scenes of Dollhouse.

Behind the scenes of Dollhouse.

Behind the scenes of Sippy Cup. 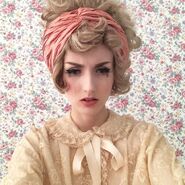 Behind the scenes of Sippy Cup. 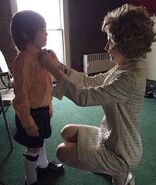 Behind the scenes of Cry Baby. 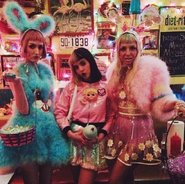 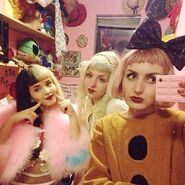 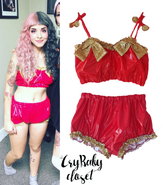 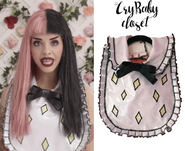 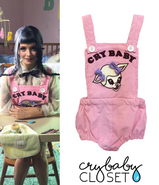 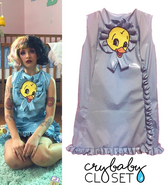 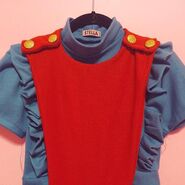 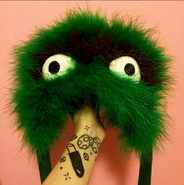 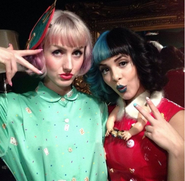 Retrieved from "https://melanie-martinez.fandom.com/wiki/Stella_Rose_Saint_Clair?oldid=149010"
Community content is available under CC-BY-SA unless otherwise noted.