Timothy Sommers, known professionally as One Love, is an American songwriter and producer. He has been working on music with Melanie Martinez since 2013.

Kinetics and One Love began writing music together after meeting in 2007 and forming a hip-hop group, with Kinetics as the rapper and One Love as the producer. In 2009, they released their debut studio album Fading Back to Normal, featuring the original Kinetics & One Love version of "Airplanes", with One Love production and Kinetics rap verses. After handing out a few hundred copies of the album around New York, a copy made its way into the offices of Atlantic Records in New York City. While still college students at Cornell University, Kinetics and One Love were invited to the label to speak with A&Rs from Atlantic and, in early 2010, signed a publishing deal with Warner/Chappell Music, Inc. "Airplanes" was bought by Atlantic and became the second single off rapper B.o.B's debut album, The Adventures of Bobby Ray.

After the release of "Airplanes," One Love moved to New York City with Kinetics. The duo began writing and producing for various artists while managed by Nullah Sarker of Hourglass Entertainment.

They have worked with Melanie Martinez on the following songs: 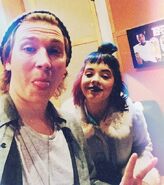