Mrs. Potato Head, also referred to as just "wife", is a character created by Melanie Martinez for her debut album, Cry Baby. She is portrayed by Nora Hall.

In Mrs. Potato Head, Mrs. Potato Head was happily married to her husband, who showered her with gifts. However, he believed that she needed a cosmetic procedure to become even more beautiful. He scheduled a facelift for her, but the surgery was botched. Mrs. Potato Head's face is now ruined, and Mr. Potato Head tries to make it better by putting a wig on her and making her wear makeup, but he was ultimately unsatisfied. He leaves her for another woman whom he believes is more beautiful.

As shown in the storybook art, Mrs. Potato Head has a physical appearance similar to that of a doll. She has blonde hair and blue eyes. She is wearing a light blue dress with a pearl necklace and pearl earrings, as well as a blue ribbon in her hair. Her face is also portrayed with a caricature nose and is marked with black lines, alluding to facelift surgery. A large syringe is also close to her face.

In the music video, Mrs. Potato Head is seen with brown eyes, brown hair and a blonde wig, and various clothes including a pink dress, pearl necklace and hat, white pajamas and light pink pants and bra, a white dress with green flowers and gloves, a hospital gown with straps, and a purple robe. 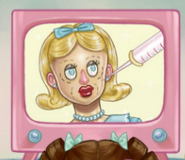 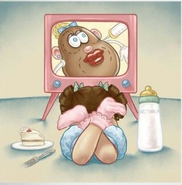