itsmegangage
Megan Gage is an American singer, actress, and model. She appeared in K-12 as Celeste. She can be seen in the film's second teaser.

Megan Gage is a singer and actress. Megan was in Melanie Martinez's film, K-12, as well as the upcoming Benedict Andrews film, Seberg. She has featured in multiple music videos, with artists such as Ty Dolla Sign, John Legend, Rita Ora, The Cool Kids, Theory of a Deadman, and more. She has featured in commercials, most notably as a face of the nationwide anti-smoking campaign, Fresh Empire. She has been featured on Spotify's Dance Rising and Fresh Finds playlists. You can listen to her music on all major streaming platforms. 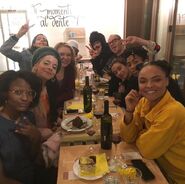 Megan at the premiere of K-12.