K-12
Magnolia is a character created by Melanie Martinez for her film, K-12. She is a student at K-12 Sleepaway School and one of Cry Baby's friends. She is portrayed by Zinnett Hendrix.

Magnolia meets Cry Baby during lunch. When the group of friends discover that Fleur, a friend of Kelly, has the same abilities as them, Magnolia suggests that they set up a food fight in an attempt to separate her from the group. However, when she attempts to join in on the fun herself, she is stopped by Celeste.

When Lilith (a spirit guide) appears again with the gate to return home, Magnolia, Fleur, Celeste, and Ben are the first ones to go.

Magnolia is described as mischievous, funny, intelligent and pure-hearted. She is loyal to a fault, creative, and a great friend to Cry Baby and the group.

In Alternative Press magazine, Magnolia was revealed to be Cancer sun and Taurus rising. Her zodiac sign was described as creative, spontaneous, faithful, emotional and protective, but also as moody, pessimistic, clingy, overemotional, suspicious and a complainer.

In K-12, Magnolia was revealed to be an Empath guided by Lilith. When her eyes turn black, it represents her being awakened to a higher level of consciousness. 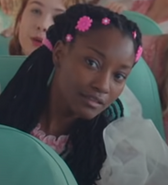 Magnolia in Wheels on the Bus. 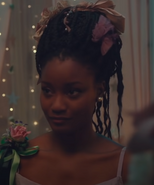 Magnolia at the 150th School Dance.

Retrieved from "https://melanie-martinez.fandom.com/wiki/Magnolia_(Character)?oldid=150716"
Community content is available under CC-BY-SA unless otherwise noted.