K-12
"Lucy" is a character created by Melanie Martinez for her film, K-12. She is a student at K-12 Sleepaway School, an ex-friend of Kelly, and Brandon's girlfriend. Lucy is portrayed by Natalia Toth.

On the playground, Lucy tries to warn Kelly about Brandon talking with Cry Baby, but she is ignored. When Kelly sees it and storms off to attack Cry Baby, Lucy holds Angelita back so she can't help.

In the cafeteria, Lucy is sitting with Kelly and the rest of her posse. When Kelly tells Cry Baby to sit with them, she takes pictures of Cry Baby with the girls and talks with her. She hides behind one of the pillars in the cafeteria as the food fight is going on. Lucy informs Kelly about Cry Baby hiding with Fleur behind the counter, which results in Kelly telling Leo that Cry Baby started the food fight, getting her detention.

At the dance, Lucy is seen free from Kelly, as she is now dating Brandon. Kelly tries to get Holly, Chloe and Rachel to back her up, but they side with Lucy, leaving her alone.

Lucy is shy and introverted. Due to this, she spends most of the film in Kelly's shadow and being mistreated by her. She is not a bad person, but because of Kelly's influence, she comes off as mean. 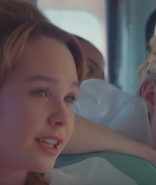 Lucy on the school bus.