Lindsey Stirling is an American performer well known for playing 'hip hop violin', where she plays violin with hip music while dancing. She appeared on Season 5 of America's Got Talent and was a quarter-finalist.

Lindsey describes her childhood as being raised in a modest household and stated "I would not trade my humble childhood years for anything else." Due to her family's financial limitations, her parents could only afford to find a violin teacher who would give her half lessons. Told by instructors that "a child isn't going to learn how to play in 15 minutes a week", her parents persisted, and at the age of five she began taking violin lessons.

Lindsey performs a variety of music styles, from classical to pop and rock to electronic dance music. Aside from original work, her discography contains covers of songs by other musicians and various soundtracks. Her music video, Crystallize finished as the eighth-most watched video of 2012, and her cover version of Radioactive with Pentatonix won Response of the Year in the first YouTube Music Awards in 2013. Lindsey achieved one million singles sold worldwide by August 2014. As of July 2016, her Lindseystomp YouTube channel exceeded 8 million subscribers and over a billion total views.

Lindsey has been named in Forbes magazine's 30 Under 30 In Music: The Class Of 2015. Forbes notes her quarter-finalist position on America's Got Talent season five in 2010,a No. 2 position on the Billboard 200 for her second album Shatter Me in 2014, and her 8 million subscribers on YouTube. 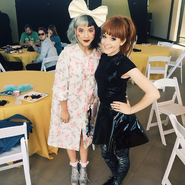 Add a photo to this gallery
Retrieved from "https://melanie-martinez.fandom.com/wiki/Lindsey_Stirling?oldid=106826"
Community content is available under CC-BY-SA unless otherwise noted.