Kenyon E. Parks is a photographer from New York. He was Melanie Martinez's earliest known boyfriend that she dated in mid 2011. Not much is known about him and/or their relationship. 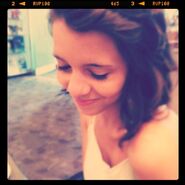 Add a photo to this gallery
Retrieved from "https://melanie-martinez.fandom.com/wiki/Kenyon_Parks?oldid=146156"
Community content is available under CC-BY-SA unless otherwise noted.