The K-12 Tour Part 2 is the second leg of Melanie Martinez's K-12 Tour. It began in January of 2020 and ended in February of 2020; however, it was originally scheduled to end in March.

The tour was officially announced on September 20th, 2019. Tickets went on sale on September 27th, 2019.[1] In November of 2019, seven dates in March were added due to being postponed from the first leg of the tour.

On January 13th, 2020, Sub Urban announced that he would be the opening act for the North American dates of the tour.[2]

In March of 2020, all seven tour dates set to take place towards the end of the month were postponed due to the coronavirus pandemic, causing the tour to end early. The dates had previously been postponed from the first leg of the tour due to illness.

* - The song was only performed on select dates. 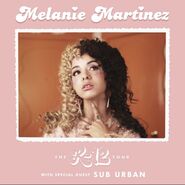