"Training Wheels"
Johnny is a character created by Melanie Martinez for her debut album, Cry Baby. He is portrayed by Eliseu Junior.

In "Soap", Cry Baby invites him to come over, and he takes a bath before heading over. While sitting in the bathtub, the tub begins to overflow with water as Cry Baby sings from outside, describing that she is unable to find the words to describe her feelings about him. The television in the bathroom turns on, displaying clips from the promotional video. When the line "threw a toaster in the bathtub" is sung, a toaster is dropped into the tub, electrocuting Johnny. Then, bubbles begin to appear and Johnny pops them. Cry Baby then appears in the bathtub and kisses Johnny.

In "Training Wheels", Cry Baby sings about her transitioning relationship with Johnny, wanting to move on to the next stage. She teaches him how to ride a bike without training wheels which symbolizes their changing relationship. When he is able to successfully ride the bike, he rides towards her. Cry Baby, falling in love, leans in for a kiss, but Johnny disappears. Although she was ready for their relationship to move on, Johnny was not. He later breaks Cry Baby's heart when he doesn't show up for her birthday party in "Pity Party", as his name appears on one of the invitations. That causes Cry Baby to throw a huge tantrum.

Johnny is notably more compassionate towards Cry Baby than her previous boyfriend, Alphabet Boy. However, he proves to be someone who fears commitment as shown in his absence at Cry Baby's birthday party and hesitation to move forward in their relationship. 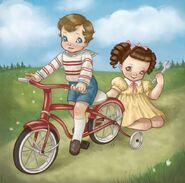 Melanie as Cry Baby and Eliseu as Johnny, from the "Training Wheels" music video shoot. 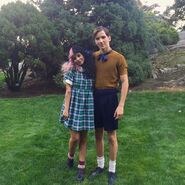