The following has a Wikia of their own: JAZMIN BEAN Wiki.

Jasmine Adams known professionally as Jazmin Bean, is a non-binary British singer-songwriter and makeup artist. They are popularly known for their bold makeup looks, their whimsical and surrealistic visuals on social media and for being the founder of the makeup brand Cult Candy Cosmetics.

Jazmin identifies as non-binary and uses "they/them" pronouns. When Jazmin was 11-12 years old, inspired by dolls, they began experimenting with makeup, transforming their face and physical appearance. They began getting into drag culture but shortly after grew bored of it. They were inspired by Japanese pop culture and mythological creatures and they began to transform them self into their favorite creatures by facing the mirror. Jazmin explains that their love of mythology began as a game. 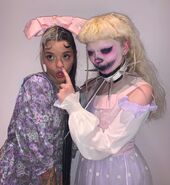 Retrieved from "https://melanie-martinez.fandom.com/wiki/Jazmin_Bean?oldid=142721"
Community content is available under CC-BY-SA unless otherwise noted.