Melanie Martinez Wiki
Register
Don't have an account?
Sign In
Advertisement
in: Covers, The Voice Covers, 2012,
and 2 more

John Lissauer
"Hallelujah" is a song originally by Leonard Cohen that Melanie Martinez and the rest of the participants of season three of The Voice covered.

This performance was done to remember the victims of the Sandy Hook school shooting. Each participant held up one of the victims' names. After the performance, images and short descriptions of the victims were shown. Melanie held up the name Noah Pozner, who was a six-year-old boy. 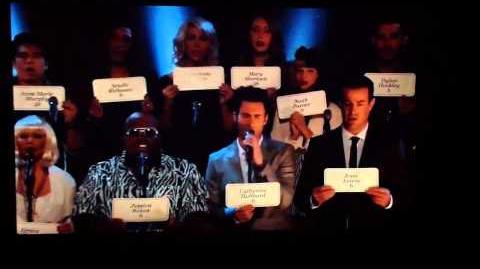 Now I've heard there was a secret chord
That David played, and it pleased the Lord
But you don't really care for music, do you?
It goes like this
The fourth, the fifth
The minor fall, the major lift
The baffled king composing Hallelujah

I did my best, it wasn't much
I couldn't feel, so I tried to touch
I've told the truth, I didn't come to fool you
And even though it all went wrong
I'll stand before the Lord of Song
With nothing on my tongue but Hallelujah