K-12
Fleur is a character created by Melanie Martinez for her film, K-12. She is a student at K-12 Sleepaway School who becomes friends with Cry Baby after the events of "Orange Juice". She is portrayed by Zion Moreno.

Fleur is a former friend of Kelly, Lucy and the rest of Kelly's clique. She developed bulimia, partially due to the pressure from Kelly to maintain a certain physique to remain in her friend group. She ends up leaving her toxic friend group and befriends Cry Baby, Angelita, Celeste, and Magnolia. With the help of her new friends, she learns how to love her body. Fleur ends up helping the group escape from the school and is among the first to leave when Lilith appears with a doorway to home.

Fleur was revealed to be an Empath guided by Lilith (a spirit guide). When her eyes turn black, it represents her being awakened to a higher level of consciousness.

Fleur is the shyest member of the group, although she becomes more confident as the film progresses. She is very fragile and has low self-esteem, shown by how insecure she is about her body and how she easily caves when pressured by Kelly. She is loving, kind, loyal and brave.

Melanie revealed in an interview with BUILD Series that Fleur is a Pisces. It was later revealed in Alternative Press magazine that both her Sun and rising sign are Pisces. Her zodiac sign was described as imaginative, kind, compassionate, intuitive, sensitive and selfless, but also as escapist, idealistic, weak-willed, oversensitive, pessimistic and lazy.

As an empath, Fleur is shown to have magic/psychic powers, where her eyes are turned completely black when she uses them. Below is a list of powers that Fleur has displayed thus far: 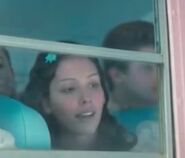 Fleur on the bus.

Fleur in the cafeteria. 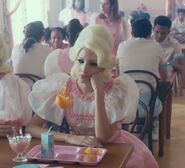 Fleur activating her powers to peel an orange.

Fleur crying in the bathroom.

In the photoshoot of Emily Soto we are shown what Fleur would be in the first idea.