"Dollhouse" is the debut EP by Melanie Martinez. It was released on May 19th, 2014. The EP was primarily produced and co-written by Kinetics & One Love.

The extended play was originally titled "The Dollhouse"[1][2] though was shortened to simply "Dollhouse" through conceptualization.

Following the release of the EP, the Dollhouse Tour began. The tour was centered around the EP, along with other songs that were supposed to be on Cry Baby. Two additional legs of the tour were later added. After the third leg, she was the opening act for Lindsey Stirling's Music Box Tour.

The EP tells the story of a girl dealing with her family and boyfriend, which doesn't turn out the way she wants it to. The first song, "Dollhouse", sets the backstory of the main character, who lives in a dysfunctional family that hides under an outwardly "perfect look". The EP explores mature subjects that are disguised under innocent themes. "Carousel" uses a carnival and carousel to express the state of loving someone while being trapped in a one-sided relationship, where the love interest is unattainable. "Dead To Me" is the aftermath of "Carousel", showing Melanie trying to get rid of that person from her life by figuratively killing them and forgetting about them. "Bittersweet Tragedy" sums up their relationship, where the sweet moments constantly overshadowed the dysfunction.

There was a limited edition vinyl version of the EP that was released for "Record Store Day". It is colored half pastel pink, half baby blue and the cover has pictures of paper houses on it. It comes with a digital download of the EP. It was also available for sale on Melanie's website. The design of the vinyl is self-described by Melanie as "a light blue cookie dipped in strawberry frosting". 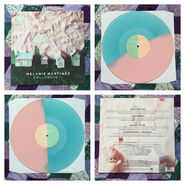