"Cry Baby", alternatively stylized as "Crybaby", is the debut album by Melanie Martinez. It was released on August 14th, 2015, by Atlantic Records through digital download, CD, cassette and vinyl. The album debuted in the top 10 on the Billboard Hot 200 albums chart, placing a spot at #6 with 40,000 total copies sold in its first week. It also topped the Billboard Alternative albums chart by dominating at #1. The album was certified platinum by the RIAA on February 24th, 2017, and x2 multi-platinum on June 4th, 2021.[1]

Melanie began recording for an unreleased EP shortly after being eliminated from The Voice. The EP was completed around 2013 and was ready to be released, but she later scrapped it after recording her song "Dollhouse" which led her to change her sound and start working on a new album.

In January 2014, she confirmed the name of the album.[2] In May 2014, Melanie put out her debut EP, Dollhouse, and announced that summer that she hoped to have her album out around October. When October came, Melanie released the music video for "Carousel" and postponed her release date for her album, and stated that she hoped to have it out in the spring of 2015. The first single from her debut album was "Pity Party" and was confirmed on May 27th, 2015. The music video was accidentally leaked by Melanie herself on May 29th, 2015, but she later tweeted that she was happy and excited for the fans who had already seen it and promised there was "more to come" during her live stream on June 1st, 2015. It was officially released on the day of the live stream.

During the live stream, Melanie announced that the release date of Cry Baby would be in August. She also revealed that it would be available to pre-order soon. The second single, "Soap", was confirmed in late June and it was announced soon before it was to be released on July 10th, 2015. The one-shot music video came out the same day. On July 16th, 2015, the album art and release date were leaked on Amazon, although the release date was false. The next day, on July 17th, 2015, the album art was officially revealed and merch bundles were available to pre-order on Melanie's website, with the digital pre-order on July 24th, 2015. Before then, the tracklist of the album was leaked, although the websites that leaked it replaced "Play Date" with "Half Hearted". The final tracklist was officially revealed with the album pre-order on July 24th, 2015.

Starting on July 27th, 2015, Melanie released a snippet of each song (apart from the songs on the deluxe edition) on her Instagram. On July 28th, 2015, Melanie released the snippet for "Sippy Cup" and announced that it would be released on July 31st, 2015. On July 30th, 2015, SPIN Magazine premiered the video and "Sippy Cup" was released the day after. The album was released on August 14th, 2015. The CD was packaged as a storybook, with jewel case CDs available later. Both a picture disk and a standard black vinyl were also released. Cassettes were then advertised as being in yellow, blue, and pink. There is also a less common green cassette. All physical copies of the album are the standard explicit, with the deluxe and clean being digital exclusives.

Cry Baby's Extra Clutter, an EP on vinyl with the album's 3 deluxe tracks as well as Christmas single Gingerbread Man was released exclusively at Urban Outfitters on November 25, 2016. The Cry Baby Coloring Book was released at Barnes & Noble a few days later on November 29, 2016.

This album tells the story of Cry Baby, a fictionalized version of Melanie and a representation of her unfortunate childhood and her vulnerable and messed-up side. Melanie claims that many of the things that have happened to Cry Baby are similar to the things that have happened in her own life,[3] mixed in with fantasy elements. Each song on the tracklist is titled something childhood related, while the actual message being crossed to the listener carries more adult-like themes and problems.

The storybook available in the pre-order bundle features rhymes and illustrations based on the album. It was written by Melanie herself and the illustrations were drawn by her ex-friend Chloe Tersigni.

There are 13 tracks on the CD with 3 additional on the deluxe version. More than 50 songs were intended for Cry Baby, but only a quarter of them made the final cut. In an interview with TheKnockTurnal, Melanie revealed that she would loved to have included more songs on the album, but "she can’t put 30 songs on an album".[4]

There is both an explicit version of the album and a clean version.

Melanie had recorded many songs between 2013 and 2015 with the intention of including them on this album. This list is of known songs which didn't make the final cut.

These are outtakes with unknown titles that Melanie has worked on, but were only mentioned by social media posts with little information.

On April 29th, 2014, American record producer and songwriter Dre Skull, posted in a now deleted tweet that he was in the studio with Melanie Martinez.[5]

On July 30th, 2014, Melanie Martinez and British singer-songwriter Talay Riley posted two Tweets indicating that they were in the studio along with American record producer Rey Reel writing "the sweetest song".[6][7]

Melanie Martinez is credited as one of the artists that the producer and songwriter J Soundz has worked with.[8] It is believed that he produced songs intended for Cry Baby, as most of his genres are Hip Hop, Pop and R&B-Soul, that also fit in the album's genre.

These are songs that were only instrumentals and concepts.

In February 2014, Melanie had different plans for the album. One of its earliest versions was not story-driven; Melanie also decided to rework 2013 EP tracks such as "A Million Men", "Birthing Addicts" and "Dear Porcupines", but it's unknown if she ever got around to actually remaking them. "A Thousand Words" was also considered for inclusion on the project, but it's believed that she was simply going to use the EP version from 2013 as it seems to fit the album's sound during that time period.[9][10]

"Bones Are Blue", "Night Mime" and "Rough Love" are 2013 EP tracks that were actually known to be reworked for Cry Baby. The new version of "Night Mime" was recorded in late 2013 and produced by Robopop which then got performed live multiple times in 2014.

The "Bones Are Blue" and "Rough Love" remakes were made in February 2014 with production by Redd Lights, following Melanie's Gramercy Theatre performance earlier that month. Melanie didn't acknowledge the 2 songs at all after reworking them and never performed them again, so it's possible she scrapped them due to being unsatisfied with the new versions.

"Coloring Book" was a title Melanie was considering for the album. It was later proven to be a real song, meant to replace Cry Baby. "Coloring Book's" lyrics gives a rough idea of the album's earliest story-driven version, including the tracklist, although nothing is 100% accurate.

Lastly, a promo CD was sent to media prior to the release.[11] 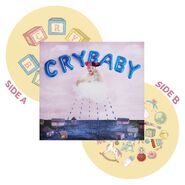