Cry Baby's House is a location created by Melanie Martinez for her debut album, Cry Baby, and later used in her sophomore album K-12. It is where Cry Baby lives, and it is featured in the Cry Baby, Sippy Cup, Soap, Pity Party, Tag, You're It, Mrs. Potato Head, and Mad Hatter music videos. It is also shown at the beginning of her first movie, K-12, in the Class Fight music video, and in the commercial for the Cry Baby Perfume Milk.

In the Pity Party and Tag, You're It music videos, the exterior of the house is shown. It is painted yellow, with blue or gray stairs and pathway. There is also grass and a variety of plants, with a white mailbox in which Cry Baby sticks the invitations for her party. Past her house, there is a street and a sidewalk, along with a metal trash can where she throws her streamers away.

In the Pity Party, Cry Baby, and Mad Hatter music videos, the interior of the house is shown. In Pity Party, the living room is old-fashioned and pastel. There is a pink couch with a coffee table that has antique toys. There are pink suitcases beside the couch, along with another chair and a table. The table has a blue phone and other toys. There are stairs leading up to currently unknown rooms, along with a door to Cry Baby's bedroom. The bedroom has a fireplace, a bed, building blocks, a record player, a rocking horse and duck, a tiny carousel, and a cradle. This leads into a bathroom that currently hasn't been seen other than the mirror (see below). The kitchen is briefly seen at the end of the video. It has a table along with drawers in the back of the room. Little is seen of the kitchen. Cry Baby's bedroom is significantly different in the Cry Baby music video. It is likely that she switched to a different bedroom after growing older. The walls are painted purple or pink, with blue windowsills. There are toys cluttering the room and a crib in the back of the room. A dollhouse is in the corner, referencing the Dollhouse music video.

In the Mad Hatter music video, another bedroom is shown at the beginning. The bed, along with the rest of the furniture, is pastel pink. There are an old-fashioned doll and various perfumes shown on her nightstand. Despite being Cry Baby's bedroom, it's different from the bedrooms shown in Pity Party and Cry Baby. Again, it is likely that she switched bedrooms after growing older. This same house reappears in the opening scene of K-12, showing the kitchen and bathroom to also be varying shades of pastel pink and green. Mom's room, unlike the others, has more green furnishings than pink. 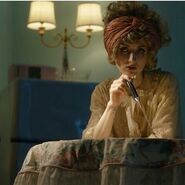