Melanie Martinez Wiki
Register
Don't have an account?
Sign In
Advertisement
in: Songs, Covers, The Voice Covers,
and 3 more

Bill Appleberry
"Crazy" is a song originally performed by Gnarls Barkley that Melanie Martinez covered while on The Voice and multiples times live after.

In the Top 6, Melanie chose this song as one of her two songs that night to perform, with the other being "The Show". During this song, there was smoke on the ground and mannequins holding instruments. For this night, Melanie dyed the blonde half of her hair blue.

[Verse 1]
I remember when
I remember, I remember when I lost my mind
There was something so pleasant about that place
Even your emotions had an echo in so much space
And when you're out there without care
Yeah, I was out of touch
But it wasn't because I didn't know enough
Just knew too much 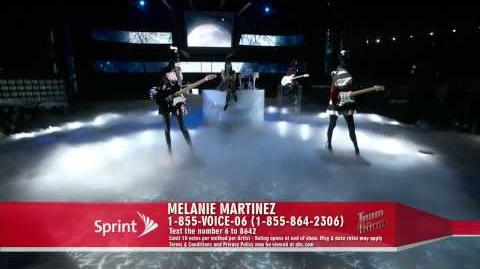 Crazy (The Voice Performance)
Community content is available under CC-BY-SA unless otherwise noted.