K-12
Blue Boy is a character created by Melanie Martinez for her debut album, Cry Baby. Two other blue boys also appeared in her film, K-12, as students at K-12 Sleepaway School. He is portrayed by Lucas Mogerley in Pacify Her.

Blue Boy is upset by his current relationship with Basic Bitch. They're not really in love since he's just dating her for her looks. Blue Boy falls for Cry Baby in the Pacify Her music video, and Basic Bitch and Cry Baby begin to fight over him. Ultimately, Basic Bitch shows her breasts to him, wins Blue Boy over, and leaves with him. 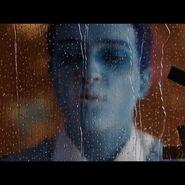 Blue Boy in Pacify Her.

Blue Boy in the official trailer of K-12.