Pacify Her
Basic Bitch is a character created by Melanie Martinez for her debut album, Cry Baby. She is Blue Boy's girlfriend.

In the storybook, Basic Bitch is portrayed as a young girl with short blonde hair and pale blue eyes. She wears a light pink dress with a white collar and belt, as well as a matching pink hair bow. She wears brown boots and white lace socks.

In the Pacify Her music video, Basic Bitch has long blonde hair and brown eyes. She wears a long white dress and a white hat decorated with flowers.

Basic Bitch is a girl that is "growing up too quickly". She first appeared in the music video for Pacify Her as Blue Boy's girlfriend. She is judgmental and rude towards Cry Baby, and they fight over Blue Boy's attention. In the end, the only way Basic Bitch was able to keep Blue Boy interested in her was by showing him her breasts, turning his attention away from Cry Baby and causing him to leave her. 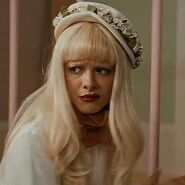 Basic Bitch in the music video for Pacify Her.