3rd Studio Album
Angelita is a character created by Melanie Martinez for her film, K-12. She is a student at K-12 Sleepaway School and is Cry Baby's best friend. She is portrayed by Elita Harkov.

Angelita is first seen when Cry Baby boards the school bus to K-12 Sleepaway School. The two appear to have been friends for a while. When one of the other students throws a note at Cry Baby calling her a "gap-toothed bitch", Angelita sides with Cry Baby and tells her to ignore them. Kelly and the other students continue to harass her, now making fun of her name. The two girls use their powers to cause the bus to swerve around. The driver sees blood on the mirror and drives into the lake nearby, but when Cry Baby and Angelita see this, they use their powers to make the bus fly into the air. Angelita considers not letting the bus down, but a boy yells that he's going to jump out the window. They decide to land the bus and are taken to school. In "Teacher's Pet", it's revealed that Angelita is in a sexual relationship with the Biology Teacher whom tells her to stay after the class ends. She wishes to have a serious relationship with him, however, he only uses her for sexual gratification. She eventually attacks him with a knife, presumably killing him, before the video cuts to black and ends.

It is implied that Angelita had a difficult childhood, since she says a phrase in French that means "There's blood everywhere", which she explains that she had learned it from her nanny. She was revealed to be an empath guided by Lilith (a spirit guide). When her eyes turn black, it represents her being awakened to a higher level of consciousness. She can move objects from a distance and create fire with her mind.

As opposed to Cry Baby, Angelita is cold and laid back. She will not hesitate to use her powers to harm those she hates which is shown when she encourages Cry Baby to use her powers during her fight with Kelly. Aside from that, she is a soft-spoken girl who sticks up for Cry Baby and others.

In Alternative Press magazine, Angelita was revealed to be a Leo sun and Libra rising. Her zodiac sign was described as tactful, romantic, charming, just, diplomatic and balanced, but also superficial, detached, unreliable, laid-back, indecisive and self-indulgent.

As an Empath, Angelita is shown to have magic/psychic powers, where her eyes are turned completely black when she uses them. This is shown multiple times in K-12, telling her friend Cry Baby that "they can do whatever they want" when it comes to their powers. It is shown that she often takes advantage of her skills for her own benefit. Below is a list of powers that Angelita has displayed thus far: 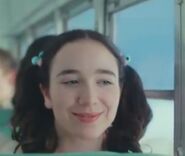 Angelita on the school bus. 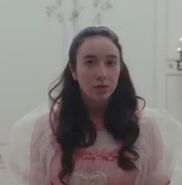 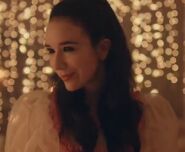 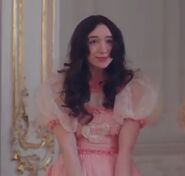 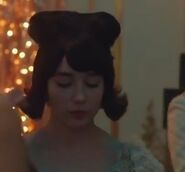 Angelita at the dance. 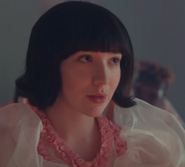 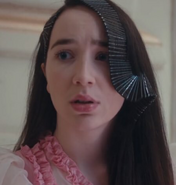 Angelita in the 2017 photoshoot for "Teacher's Pet".