Alphabet Boy is a character created by Melanie Martinez for her debut album, Cry Baby. He is portrayed by Austin Scoggin in the music video for Carousel.

Alphabet Boy is based on one of Melanie's former boyfriends from college. According to an interview, this boyfriend would always try to teach Melanie the "right way" to write songs because he didn't like her way of writing.

Alphabet Boy is Cry Baby's first crush. He first appears in Carousel, where Cry Baby falls in love with him, but the feelings aren't reciprocated. In Alphabet Boy, Cry Baby cries over him until she realizes that he isn't worthy of her and dumps him.

Alphabet Boy is generally portrayed with short blonde hair and blue eyes. His clothing tends to vary, although in the booklet he wears a white short-sleeved shirt with blue shorts. There are slight differences in his Carousel appearance, as he wears a white tank-top and black suspenders.

Alphabet Boy is depicted as an arrogant know-it-all who consistently belittles Cry Baby. He is highly possessive and patronizing, deriving from a superiority complex. His prince-like personality is expanded on more in Alphabet Boy. 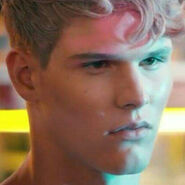 Alphabet Boy as he appears in Carousel.

Retrieved from "https://melanie-martinez.fandom.com/wiki/Alphabet_Boy_(Character)?oldid=154818"
Community content is available under CC-BY-SA unless otherwise noted.